Acclaimed photographer Mary Beth Meehan and Silicon Valley culture expert Fred Turner join forces to give us an unseen view of the heart of the tech world.

“If the fate of Silicon Valley is the fate of America—as so many of its boosters claim—then this book gives us an unvarnished look into the future.”

Silicon Valley glitters with the promise of extraordinary wealth and innovation. But behind the façade lies a world segregated by race, class, and nationality in complex and contradictory ways.

“For those who have not been fortunate enough to make billionaire lists, for midlevel engineers and food truck workers and longtime residents, the valley has become increasingly inhospitable, testing their resilience and resolve,” say photographer Meehan and Turner in The New York Times.

‘It has Always Shown its Bruises’: an American Town Left Behind – in Pictures – The Guardian

Nick Meyer (b.1981), who holds an MFA from California College of the Arts, grew up in a small mill town of Greenfield in Western Massachusetts. Since his youth, the town’s terrain has been in flux, with houses and shops continuously erected, razed, and rebuilt in the chasm left by disintegrated industries.

The Local documents a town caught between aspiration and decline, a deeply personal account that reveals the struggles, tumult, and everyday life that occur in a place which, from the outside, appears caught in stasis.

“I have watched the landscape shift, caught up in its own history and touched by the world passing through,” says Meyer in The Guardian. “I have seen houses and shops built, abandoned, torn down and rebuilt, but mostly things have stayed the same.”

“The thing that I really like about photography and something that I’ve always been enamored by is its inability, to tell the truth,” Meyer tells BuzzFeedNews. “Even a photojournalist, they can’t always tell the truth. It’s always going to be this one person’s view…While I’m photographing real things in the real world, the bottom line is still the very subjective approach of my own.”

‘A Gift to Posterity’: Four Men Who Risked the Wrath of Stalin to Photograph the Holodomor – Radio Free Europe

The Bolsheviks, who were members of the extremist wing of the Russian Social Democratic party that seized power in Russia by the Revolution of November 1917, never wanted the world to know the story of the Holodomor.

Communist authorities under Soviet dictator Josef Stalin forced peasants in Ukraine to join collective farms and took away their grain and other food products. This man-made famine killed 4 million Ukrainians from 1932-33. Stalin and his henchmen suppressed the news at home and abroad as they were intent on creating an idealized portrait of the Soviet Union.

This is the story of a handful of photographers who defied the Soviet authorities by capturing the horrors of the Holodomor on film. They were foreigners, most notably Alexander Wienerberger, James Abbe, and Whiting Williams.

Here is a collection of 10 of Richard Avedon’s best unpublished photos. And if you wish to see more of Avedon’s work, there are 85,459 posts at #RichardAvedon where he joyfully contradicts the cliche “the camera never lies.”

World Sports Photography Awards is created by a unique partnership between Twelfthman, a sports creative and design agency, and Iconify, the awards agency behind innovative awards campaigns.

The winners will be announced on June 2, but right now, you can see the shortlist 2021, which has over 400 photos across 20 different sports.

In a new book, New York: PARADISE LOST Bushwick Era Disco, out in June, she shows images that she captured of her students and colleagues during her teaching days from 1981-1994.

“The students were on the pulse of popular culture, exuded youthful pride, and could challenge one’s wits,” she tells The New Yorker.

Photographing the Wild Streets of New York in the 1980s – Blind

“I took my share of risks photographing the way I did, especially during the late seventies when it felt like New York was unraveling,” writes Jeffrey Hiller in Blind. “I rode the subways in the middle of the night and ventured into unsafe places where I didn’t belong. But I was preoccupied making photographs. The camera served as a protective device, giving me a purpose and sense of security…New York is still in my blood. I can still feel the rhythm of the city.”

Looking at the Legacy of ’90s Family Portraiture – L’Officiel

Here is a revisit to four iconic photographers from the ’90s who reimagined the concept of family portraiture.

“From Michael Clegg and Yair Martin Guttmann, who distantly and meticulously photographed power families; to Richard Billingham’s spontaneous and dirty realism; the tenebrous Southern Gothic style of Sally Mann; or the sumptuously classic imagery by Carrie Mae Weems; their bodies of work disclose the dynamics and complexities of family portraiture,” say Mateos and Teyssou in the article above.

How Can Photography be Used to Rehabilitate in Prisons? – It’s Nice That

A new book, by Professor of photography Nigel Poor,  The San Quentin Project, addresses that very question. It shows us a dose of daily life inside one of America’s oldest and largest prisons.

Prof. Poor first began volunteering at San Quentin State Prison in 2011. She teaches photography classes and runs a podcast called Ear Hustle produced alongside a team inside the prison.

“The students in Poor’s class not only reflect on their lives or on lives adjacent to theirs but also provide insight into the iconic works of well-known photographers,” says Reginald Dwayne Betts in an essay in the book.

I like this photograph because the muted color palette of almost monochrome tonality reflects the emotion of the tender moment captured.

In March 2013, I photographed Mir Hasan and his daughter Chandtara alongside the Asian elephant, Rajleali, at the Elephant Village in Jaipur, India. I worked in natural light with a Canon EOS 5D Mark III and a Canon EF 35mm f/1.4 L USM lens to capture this affectionate embrace. As I made this image, I loved how Rajleali’s enormous form took up the entire background, setting the backdrop for this moment and naturally framing the mahout and his child.

Mahouts, or elephant keepers, are commonly family professions. The trainers are assigned an elephant early in its life, and the pair essentially live together from that point on, typically forming a close bond.

I visited the village as part of a global assignment on animal and human healthcare and was fascinated to learn how the mahouts combined Eastern and Western medicine to treat the elephants’ ailments. I had the good fortune of visiting this unconventional family during the Hindu religious festival of Holi, for which Rajleali was painted with bright colors. However, I was most profoundly moved by the depth to which the mahouts trusted their young children to be so close to the elephants, even unsupervised, and the gentle disposition of these beautiful creatures.

The Elephant Village is situated at the foot of the Amber Palace and Fort and can house up to 100 elephants and their mahouts. The design is meant to create a series of water bodies to harvest the rain runoff, as this is the most crucial resource in the Indian state of Rajasthan’s desert climate, with a goal to mimic the elephants’ natural habitats. Still, whether it’s a zoo, circus, or any other commercial venue, an elephant’s natural environment cannot be replicated in captivity. For instance, elephants in the wild have one of the largest home ranges, often walking up to 40 miles each day.

I would have the privilege of intimately spending time with these majestic beings a few years later while on assignment, once again photographing working elephants, not long before Ringling Brothers and Barnum & Bailey Circus closed their doors in 2017. Unlike domesticated animals, working alongside, breeding, and interacting with the world’s biggest land mammals has not changed their behavior, and they remain wild yet sensitive, sentient beings. 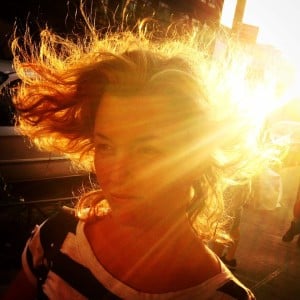 Stephanie Sinclair (American, b. 1973) is known for gaining unique access to the most sensitive gender and human rights issues around the world. Her images of the occupation of Iraq and the war in Afghanistan refute characterizations of violence in anything but human terms. Her studies of domestic life in developing countries and the United States bring into sharp relief the physical and emotional tolls that entrenched social conventions can take on those most vulnerable to abuse. The ongoing capstone of Ms. Sinclair’s career is her 15-year series, Too Young to Wed, which examines the deeply troubling practice of early, forced, and child marriage as it appears around the world today.

Since I’m inarticulate, I express myself with images. – Helen Levitt

Levitt lived in New York City and remained active as a photographer for nearly 70 years.

We welcome comments as well as suggestions. As we cannot possibly cover each and every source, if you see something interesting in your reading or local newspaper anywhere in the world, kindly forward the link to us here. ALL messages will be personally acknowledged.

About the author: Phil Mistry is a photographer and teacher based in Atlanta, GA. He started one of the first digital camera classes in New York City at The International Center of Photography in the 90s. He was the director and teacher for Sony/Popular Photography magazine’s Digital Days Workshops. You can reach him via email here.

Image credits: All photographs as credited and used with permission from the photographers or agencies.